Last semester, I did a multimedia piece for the iPad edition of Xpress Magazine (the website is the beginning stages) all about Mission Chinese Food and pop up culture in San Francisco.

While walking down Mission Street it is easy to overlook an old yellow awning bearing the name Lung Shan Restaurant in peeling letters; it is a business wedged between a consignment shop and yet another burrito joint. Nestled humbly underneath the overhang however is a hidden gem, Mission Chinese Food.

Operating every day except Wednesday, this Americanized Chinese cuisine pop up is the latest project Anthony Myint has taken on with his head chef Danny Bowien. The menu consists of dishes like Thrice Cooked Bacon, Salt Cod Fried Rice, and Sizzling Cumin Lamb – a dish that literally comes to the table bubbling and spitting its flavor. While delicious meats are their forte, Mission Chinese offers vegan/vegetarian options upon request.

The vibe inside is something quite unique, Lung Shan and Mission Chinese employees work in tight collaboration popping out dishes at much appreciated speed. It amazes me, yet doesn’t surprise me how well they all seem to peacefully coexist, after a little over a year of sharing a space, they have their routine down pat.

Mission Chinese is not the first to take over a kitchen; in recent years, young chefs have been commandeering underused kitchens and re-purposing them for their own uses all over San Francisco. These make-shift eateries are win-win for the building owners and the chefs, allowing them to provide up-and-coming culinary geniuses a great way to experiment with more outlandish menu choices without the risk of bankruptcy, and generate extra cash flow and notoriety for the original restaurant.

*I apologize for the shotty sound quality, the original audio got messed up.

In case you all needed further proof that this place is awesome, GQ recently rated Mission Chinese Food as one of the best restaurants in America.

And for those of you on the East Coast (ok, just those of you in New York), great news! Mission Chinese is opening a location on the Lower East Side!

As I many of you know, I am still in college, I work part-time, I’m on my school’s magazine, I am part of the organization, ShareFood, and I run this blog.

Doesn’t really leave much time for a crackin’ social life.

But I manage. Just barely.

I really do try to make the most of my free time, ESPECIALLY if its nice outside.

Well, my favorite thing as of late is walking 3 blocks down from my house into the San Francisco Botanical Garden to hike, picnic, or just plain hang out.

Yea, I live 3 blocks away from all this gorgeousness.

There are about a million trails like this all throughout the garden for people to explore. I swear, I’ve never taken the same path twice.

This past year, Matt bought me this amazing picnic basket that came stocked with dishware, glasses, and cutlery, so we often pack it full of goodies to enjoy on our blanket (normally we sit on the grass, but it had rained the night before, so the grass was pretty damp and muddy) 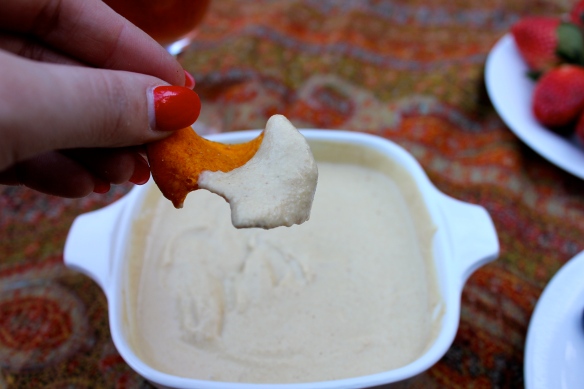 Homemade garlic hummus with a sweet potato crisp anyone? 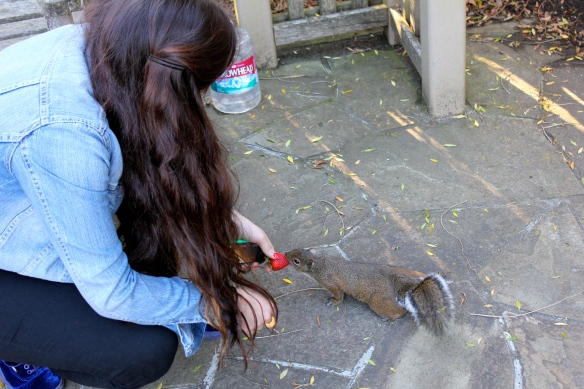 Look at this little man! How the heck could you not love him?! I was not zooming on my camera by the way, this is how close he was.

I too like taking pictures of my cutie boy feeding the squirrel cutie boy. This little man seriously couldn’t get enough of our fruit, he just kept coming back for more. It was great, he would even come if I call him. It was so sad feeding him our last strawberry, cause then he scampered off, leaving only the stem and leaves behind. 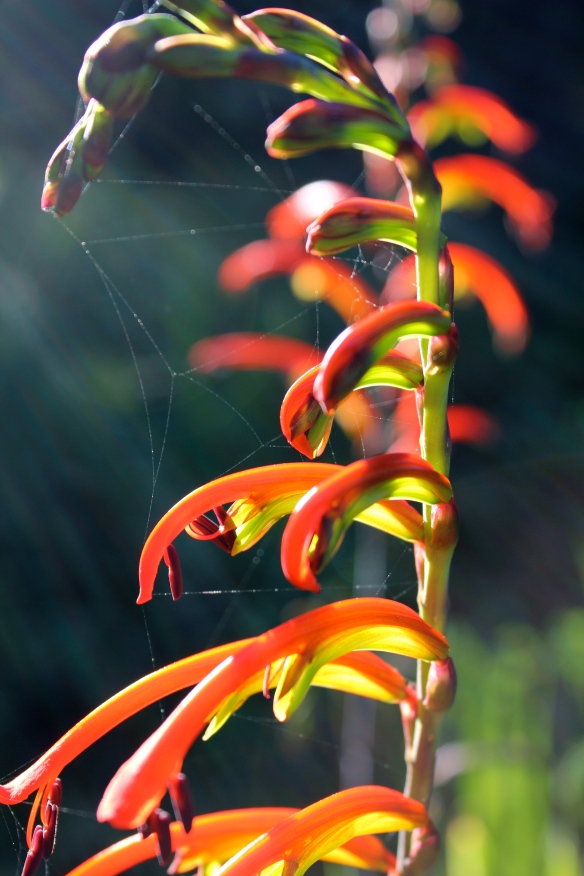 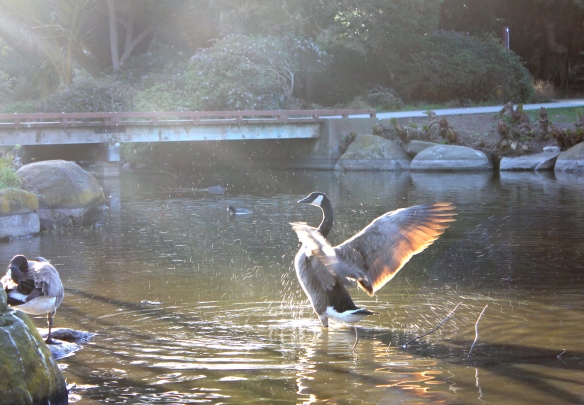 Geese do the weirdest things when they clean themselves, don’t you think?

The garden has a bunch of ponds and streams everywhere with tons of benches, so sometimes its nice to just sit and watch the birds flock about. 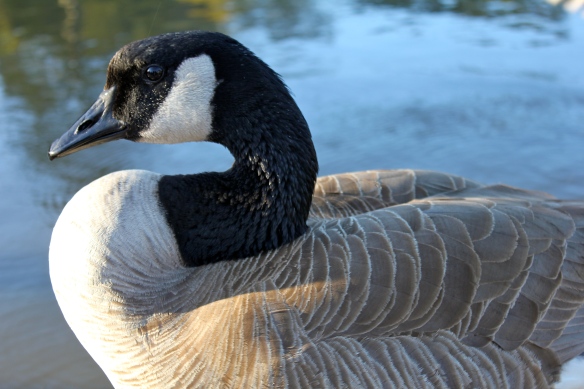 Again, I didn’t even have to zoom for this shot.

I love the Botanical Garden – its phenomenally gorgeous, its free, its close to me, and we know where the back gate is so we can sneak in and out whenever we please.

What do you like to do on your days off?

Do you ever just crave an honest to goodness burger?

No fancy extra toppings, no crazy sauces (though I love to get down on a spectacular burger like that every once in a while).

But sometimes, I just want a straight up burger, with cheese.

This is why I get on my knees and thank God for places like Red’s Java House. 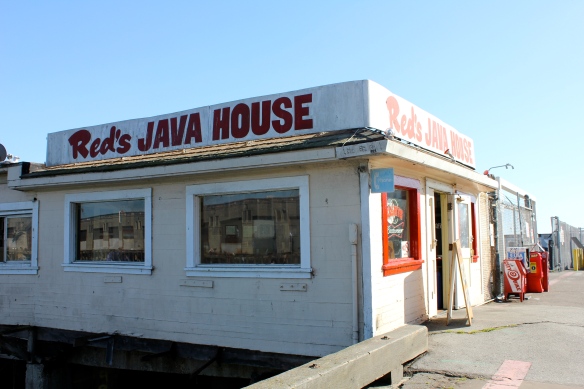 This place is a no frills, back to the basics old school burger joint right on the water at the Embarcadero at Pier 28.

The menu options go a little something like this:

Red’s is just so sassy.

This place hasn’t seen a renovation in quite some time, ain’t it just grand.

The menu is already extremely simple, but Matt and I came here for 2 reasons, a cheeseburger, and fries.

So that’s exactly what we got 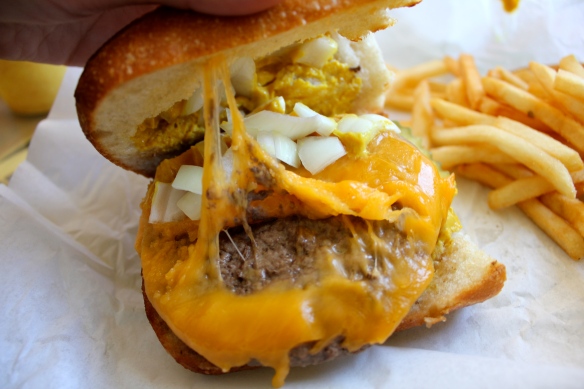 These burgers were special however because instead of a sesame bun, these babies were served on a sourdough roll.

What a concept. Way better than a traditional bun, in my opinion. But then again, I loveeee sourdough, and think everything tastes better with it.

Pretty much the cheeseburger consisted of:

So, yea, it erred on the tangy side with the mustard, pickles, and sourdough. 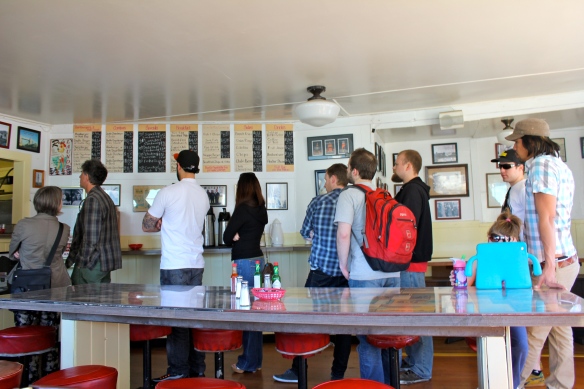 Literally right as we sat down with our food, the lunch rush came. A testament to how good this place is. Soo glad we didn’t have to wait though cause we were starving!

The back of the restaurant opens up to a waterfront patio area, and covered outdoor bar with fun music and lively patrons. Every seat in the back was taken so we headed back inside and enjoyed the padded bar stools.

Still fine by me!

When it comes to a good burger, I’m like a momma tiger protecting her cub

Matt chose to be an adult while he ate

I chose to be a child and play

Overall, this place is perfect to stop for a quick bite to eat while walking along the waterfront. If you’re sitting outside though, the fun drunken atmosphere begs you to sit back and relax for a while. Inside, the service is friendly and the decor will encourage you to reminisce over the generations past. The food is straightforward, unadulterated, and a combo (burger, fries and a drink) is under $10, which is exactly what you need sometimes.

It has been 3 days since I ended my raw food challenge, I wanted to give my body time to adjust back to a normal diet before assessing my finals thoughts and feelings.

After contemplating my experience I decided that the best way to explain everything to all of you was a simple pro/con list and a video!

Generally healthier, my body felt cleaner and “toxin” free in a way

Never got “food coma” after eating a big meal, I may have felt full, but not sluggish

It allowed me to make 90% of my diet from start to finish; almond milk, hummus, dressings

It encouraged my creativity in making composed and tasty dishes

I aware of exactly what I’m putting in my body

I couldn’t eat any traditional comfort foods, like mashed potatoes

Its expensive, as a college student I don’t have an limitless cash flow to buy all the basics and fancier things that I would have liked to incorporate into my challenge

Because I was making everything I ate, a lot of prep work was required

Limiting for me when I was out in the city, not a lot of raw options even in restaurants that feature raw food

Here’s a little video to explain some more!

Its my first blog video so don’t judge me for being awkward!

I hope you all enjoy!

When it comes down to it, a lot of people have been asking me if I will go raw forever, the answer is no.

I love cheese too much.

I will, and am, making an effort to keep it in my everyday diet!

Nestled in between a corner liquor store and Lily’s Beauty Salon rests a tiny hole in the wall with metal grates on the windows and a small doorway, exposing a diner style kitchen and just a row of bar stools to sit on. Most people walking by don’t expect much, or even see it at all, like me. But on a rare sunny day in the city, my friends Sugi, Julio, Melissa and her daughter, Sol, met up to have a lunch date.

This tiny restaurant is where we met. This tiny place called Yamo.

Melissa and Sugi swear by it, and confessed to me that they eat here about twice a week. When I peered inside, I saw every bar stool occupied and a line of customers against the wall.

Because folks, I gotta tell you, Yamo is a gem. A hidden treasure in a city of great eats. Its greasy, its casual, and its cheap. It’s what I imagine real Burmese street food to taste like.

The five of us, we got down.

An order of Mango Chicken on a bed of Steamed Rice

And Curry Prawns and Mushroom, Onions, and Green Peppers (again, sadly not photographed due to rapid consumption).

The women cooking could’ve smoked any competitor on The Food Networks Chopped, that’s how fast they were. Seriously, I think we only had to wait a matter of minutes. The joint was too packed to eat inside, plus it was gorgeous out, so we grabbed a pile of napkins and chopsticks and we walked a few blocks to a children’s park so Sol, whose 2 1/2, could play.

We found a couple of benches, situated ourselves, popped the lids off the to-go containers and feasted.

The food was SO good.

The Pot Stickers had a nice outer crisp but still had chewy dough in some places, and the sauce for them. HOLY CRAP. It wasn’t just your typical sweet chili sauce. It was a thinner spicier version with chopped up fresh ginger. It was to die for.

The Egg Rolls, were pretty amazing, nice crisp and flakey with tons of vegetables. In case you were wondering, yeah, we used the pot sticker sauce on them too. Duh!

Julio tried to commandeer the mango chicken, but after a few dirty looks from 3 ladies and a baby, he shared. The first bite explained why he was hesitant to share. It was fantastic! The chicken was moist, the mango sweet, and the vegetables (sugar snap peas and water crescents among the lot) were still super crunchy, which is vital!

The curry shrimp was Sol’s favorite, little darling was stuffing whole shrimps in her mouth only after realizing they were too big, thus forcing me to fish it out and hold it while she took modest nibbles. The curry was more like a light glaze as opposed to the typical thicker version, but on a hot day, it was perfect in not weighing us down.

It was so crunchy, but still so pungent and fresh. It was just phenomenal. The noodles were thick, albeit a little greasy, and the chicken plentiful, there was also a generous sprinkling of green onion on top, which, if you didn’t know, is one of my favorite onions and methods of adding some extra freshness to a dish.

When we were all finished we all acted like children, playing house on the jungle gym, running around and screaming, and making friends with other little kids. Sol was THRILLED. Especially when I let her try on my lipstick, so we could play grown ups.

Thank God Sol let me get in on this Neapolitan ice cream sandwich, which was also delicious.