Now here is the main dish for my dinner with Chenoa. White Fish with a salsa like topping. Spinach, olives, tomato, capers, onion all blended with a generous portion of white wine. This recipe was from the Food Network, like the green beans. Once again though, I altered the recipe to entice my taste buds.
I have really been craving fish lately, and as I am trying to expand my culinary horizons I have been making an effort to cook with it. Once Chenoa arrived we made our way to the store. After perusing the store for the best deals on everything we headed to the seafood section. The original recipe called for Sea Bass and I was looking forward to trying it. When I approached the glass encasing (that really doesn’t do much when it comes to encasing the fishy smell) I was shocked – SHOCKED – at their quite pitiful selection of Sea Bass. First of all, the didn’t have any fillets, only medallions. I could have dealt with that. But then on top of it, right next to these puny little medallions was a sign that said “Previously Frozen.” Ew. No thanks. I will use something else.

Not knowing my white fish options very well I asked the man behind the counter which fish he suggested. We came to the consensus that Dover Sole would be an adequate substitute.

If you are an inexperienced fish chef like myself, then let me REALLY recommend this recipe. Not only is it is quick but the hardest part of the prep work was slicing the olives (which you could buy pre-sliced). Oh and the diced onions,  but hey that’s not so bad.

I cut up both the olives and onions before cooking the fish to save time afterward. I diced a whole yellow onion and sliced the a can of olives thin, each olive was left in about 3 to 4 pieces once I was done wielding my knife. (The original recipe called for only half a cup of olives, but I figured we might as well use the whole can cause I really like ’em).

I have noticed, as perhaps you have from my previous posts, that I have a habit of color coordinating my cutting board to whatever color the item I am chopping. Alas, I don’t have a black cutting board, so the trend was severely disrupted. It’s a tragedy, really.

After that prep work is done, you can start on your fish by putting some oil in a pan and letting it heat up. Once it has reached an appropriate temperature lay your fillets in the pan like Chenoa did.

Seriously, these fillets were so light and thin they cooked in mere minutes. Not joking, probably a minute and a half on each side. I got a bit frustrated because of they were so delicate it looked like I had mutilated a few of the fillets before all was said and done.

Once they are all cooked place them on a plate and cover them with tin foil to keep ’em hot!

With your pan still hot it is time to turn your attention to the other ingredients!

Toss your chopped onion into the pan and add half a cup of white wine to it. It doesn’t really matter what kind of white wine you use. This is where you have some freedom. Let that simmer for a few minutes stirring it around.

Then add a can of low-sodium diced tomatoes with the juice. Then your black olives. Then 2 Tablespoons of capers. Heat it up real nice, until everything is a little soft.

Now you can add 2 cups of packed, fresh spinach. My pan was a little crowded with all the other ingredients so I added the spinach a little at a time since it cooks down really small. Stir everything around until it looks like this.

(The picture is a little hazy it seems, only cause there was SO much steam from all the heat!)

As far as the plate arrangement goes, since there was so much of the tomato-olive-ect mixture I spooned a good amount onto my dish then laid a few fillets of the Dover Sole on top and then spooned a little more on top for garnish. I put all of this next to a healthy pile of my lemon-garlic green beans (recipe in previous post). 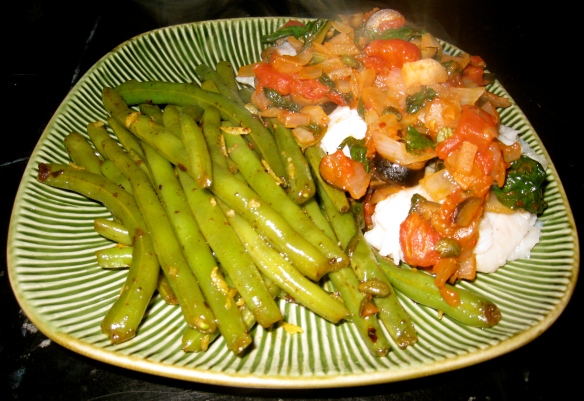 Chenoa was mid-sentence when she took her first bite. When she swallowed she said “I don’t even remember what I was talking about. And I don’t care, this is so good!” Chenoa really knows how to compliment a lady! She devoured the entire plate before I had finished half. In her defense, I was eating slowly and talking in between bites. Still though, when there were just a few morsels left on the plate she unabashedly scooted them to the edge of the plate and then licked them off the plate. Obviously a thumbs up. Right?

Each individual component brought a little something different to the dish.The tangy flavor of the capers and olives was accentuated by the white wine. The tomatoes, though from the can, still had some firmness and the spinach did a good job of wilting over several pieces of everything to encase it in a fabulous little bite. The fish was light and very flaky, so no knife needed.

If I make this recipe with Dover Sole again though I would marinade it a little before cooking it. I had some leftovers so when I heated it up the next day I added some  salt, pepper, and lemon juice which did just the trick in adding some flavor to the fish. Dover Sole is definitely a good fish to use if you aren’t too keen on a more typical or traditional “fishy” flavor.